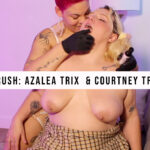 I am proud to report that I have received three (three!!!!) AVN Award nominations this year! My thanks to the folks at AVN for considering my indie projects and making sure that my DVDs and websites got into their piles. I am forever grateful for their dedication to give smaller production companies consideration – these nominations may seem little to a big porn company, but to me – they mean a lot. My audience may be smaller than most, but knowing that my art is on track with a larger scheme of the adult industry makes me feel like I’m working towards a goal of normalizing, representing, and respectfully erotizing what may seem like a “fetish” or a minority in mainstream sexual ideals. I imagine a world where everyone “gets it” – and these nominations show that at least, the journalists and judges do. These nominations don’t fuel my work – but they strengthen my stand for sex positivity, justice, and the fight for great pornography for everyone!

None of these nominations are nods that I would be able to appear on stage at the awards ceremony, so consider this blog my drafted acceptance speeches. In my heart I do of course hope something wins – nothing has yet in the four years running that I’ve been nominated – but either way, the nominations alone reward me with the sense that we as a community of ladies, artists, and queers – are being heard. It reminds me that there’s no better time than now to stick to my guns and keep going, keep making porn that rocks, keep speaking my mind, and keep taking risks – it’s risks that get the rewards. Or, awards. You know!

This site uses Akismet to reduce spam. Learn how your comment data is processed.