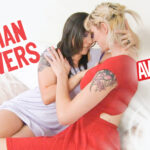 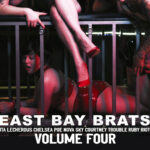 Sapphic superstar Sinn Sage opens her latest feature with Chelsea Marie, making out in the most luxurious of baths – they couldn’t help but get down and dirty as they tried to get clean! Sinn and Chelsea’s uber hot mack session leads soon to sucking, fondling, and fucking in the water and then on to the bedroom where Sinn straps on and fucks Chelsea in wild abandon.

And in the final roleplay-heavy scene, we find hot millennial Sophie Ladder languorously playing with herself when stepmom Sinn barges into her room, yet again. However, today, Miss Sophie has had enough of inconsiderate Sinn just ignoring Sophie’s right to privacy, entering Sophie’s room whenever Sinn wants! Sophie takes out her long simmering frustrations on Sinn and we get to see just who’s really in charge in THIS house!