A brand new film from TROUBLEfilms might not change the world, but it might make it easier to bear, which is why we are happy to announce that Fucking Against Fascism is now available only as a digital download through the film-makers and RealQueerPorn.Com. You can purchase it here. 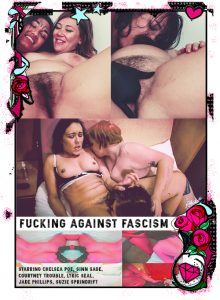 Fucking Against Fascism is also a benefit film (like TROUBLEfilms’ first release Live Sex Show) which was kind of why Chelsea Poe pitched it in the first place – to have donation money. One third of the profits of the sales of this film from RealQueerPorn.Com will be donated by Chelsea Poe. Trans Lifeline, Black Lives Matter, and a few other places will be benefactors if the film has continued sales online.

Plus, Fucking Against Fascism on Tour!

Visit the Troublefilms Events page to get details for all of the upcoming screenings related to the release of the new film, including in-person premiers in London, Paris, Amsterdam, and Berlin later this week. TROUBELfilms and the Euopean-based Sluts4Sluts Collective will be showing together on this 4-city tour, with special local guests in every city!

What makes us sluts? The need to explore our gender and sexuality outside of cisheteronormative limitations, the desire to decolonise and reclaim our sexual agency – or just a rampant desire for a filthy queer orgy! This is the world premier of sluts4sluts as a collective, and we can’t imagine a better way to explode in to the public scene than alongside our idols at QueerPornTV.  We have Spin the Bottle, a neon pink femme dreamscape starring non binary babes Dion De Rossi, Leo Leander and Mahx Capacity, as well as a sneaky peek at Queersome, starring Dion and Leo again with dreamboat Rooster.