Come Find Me!
Starring Poppy Cox & Gasper Johnson
Out June 1st, 2013
Come to the world premiere event at Center for Sex and Culture!
Directed by Courtney Trouble & Bike Smut!
A woman wakes up to an enticing Polaroid, inviting her on a bike powered scavenger hunt. After a lot of teasing she gets her she gets a thrilling reward.
A true collaboration, with a narrative shot by Bike Smut real-life couple Poppy Cox and Gasper Johnson – and a gorgeous, high definition, high art sex scene of the two of them.This is Courtney Trouble’s first full-length DVD release starring a heterosexual coupling – though these two are far from straight and narrow. 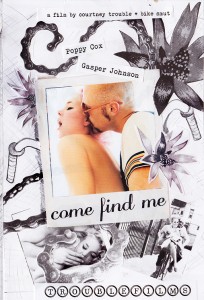