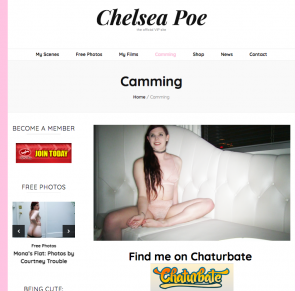 The VIP membership provided through Verotel features a great variety of work that Chelsea Poe stars in or directs herself. Members, who pay $20 a month, have 24/7 access to:

The website, now live, also features a page with information about Poe’s daily cam shows on Chaturbate and an index of the films she has directed and starred in for your perusal.

ChelseaPoe.Info was designed by Courtney Trouble.