Filmmaker and adult performer Chelsea Poe has revealed the trailer, pre-sale order, and potential clues to the final cover for the highly anticipated sequel to Chelsea Poe is Femme 4 Femme, which has been a favorite among both TROUBLEfilms and TrenchcoatX fans.

“This project is meant to be able to reach a lot of different kinds of audience members. Those who love traditional girl/girl, or might be looking specifically for cis/trans lesbian couplings like their own, all flock to this content so we are excited to put out a second volume to satiate that ongoing thirst,” explains TROUBLEfilms president Courtney Trouble, who edited the title. 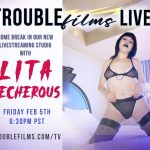