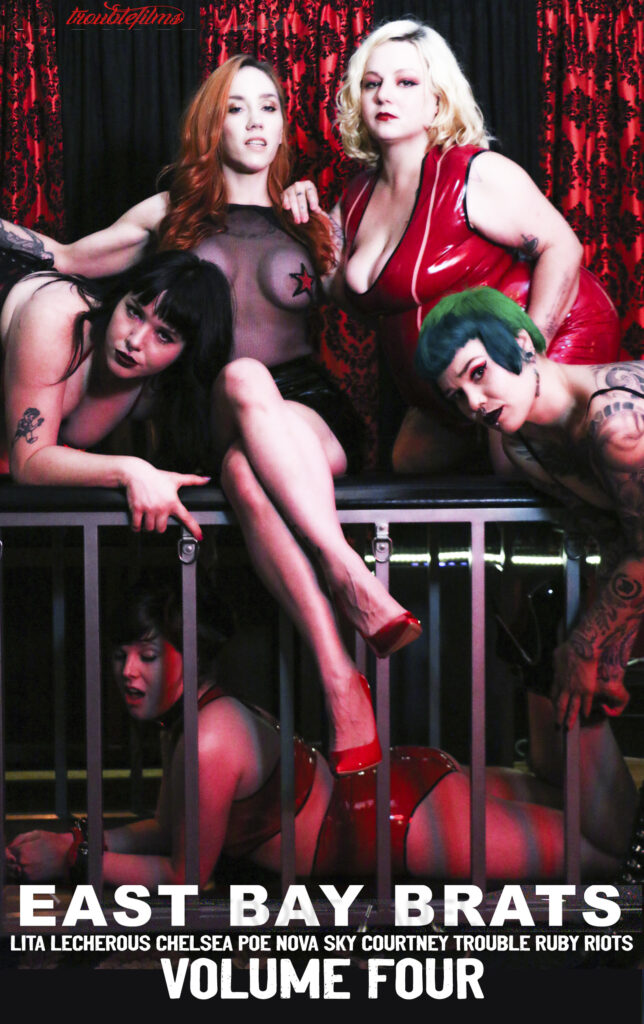 This is the first time all five performers. have been on set together and the chemistry is at all all-time high as Lita tests Nova’s pain tolerance, captures Chelsea Poe on a latex bed and pumped her breasts, and initiates a fucking machine challenge between Courtney and Ruby. While Chelsea’s tied to the bed or used as human furniture throughout the film, Nova also flogs Courtney solidly for ten minutes in the dark, spooky, sexy Victorian mansion the East Bay Brats call home to their fuck club.

The first three volumes of East Bay Brats were nominated for the 2020 AVN Awards for Best Niche Series and also screened at Folsom Street Fair. If you would like to review East Bay Brats for your blog or podcast, or screen it at your event (virtual or in-person) please contact Courtney. If you would like to sell East Bay Brats 4 or the whole series in your store please contact troublefilmsxxx@gmail.com with your pitch! The series is currently only available digitally or via VOD.

Scene One: Lita comes back to the dungeon and finds everyone running feral with power-hungry lust drunk eyes. She immediately initiates order by getting Nova into subspace with a solid whipping.  Chelsea Poe serves as human furniture so that Mistress Lita may punish Nova properly by testing her pain limits via spanking and flogging. Watch as Nova’s ass gets deep red and welty while Chelsea squirms faces underneath her.

Scene Two: Lita has Nova and Ruby join her while she straps Chelsea to the work bed and begins to install pumps and clamps onto her breasts, enacting some nipple and tit torture before leaving her to suffer on the bed.

Scene Three: Nova steals away with Courtney and flogs them with a cat o nine tail in a lovely dungeon room